Last night me and the other half watched the film ‘Dr Marston and the Wonder Women’ on DVD.  The film has much in the way of merit, it deals sensitively with some interesting issues, ‘taboo’ to a large extent even in current times.  At the same time, possibly because it has a great deal to pack into its near two hour running time, it tends to over simplify and fudge some of those same issues.  But one thing about it, for both of us, did tend to undermine its impact and credibility.  The music.

Like the vast majority of mainstream films it made heavy use of an orchestral styled score to emphasise mood, atmosphere and emotion.  More often than not, I think, this music tends to be a sort of pseudo classical music when used to underscore stories that are biographical, historic, or concerned with emotional events.  Genre films tend to have their own soundtrack conventions – atonal music in horror films, electronica or ambient works in science fiction and so on.  All this comes into the category known as ‘non-diegetic’, which is to say that it is not heard as a part of the story, as for example when a character switches on a radio and a certain song or piece of music is heard.

It’s this non-diegetic music with which I often find I have a problem.  There are certain conventions that work on us psychologically in generally predictable ways.  Sadness is evoked by minor chords, ‘borrowed’ minor chords in major scales or ‘suspensions’ (which as I understand it involve short moments of dissonance resolving into consonant harmonies).  Yearning, specifically I read, can be expressed by a technique known as ‘appogiatura’ in which a non-chord note appears in the melody.  Happiness, of course, is associated with major chords.  Strong rhythms, shifting dynamics and build-ups enhance action sequences.  And so on.  It is one of the wonderful mysteries of music that these musical structures have these effects upon us, and I’m not suggesting that all films should do without them.  My problem lies with the sense that I am too often being spoon-fed.  The soundtracks tend to drench me in the required emotion, rather than allow me to arrive at my own conclusions from the dialogue, the acting and the storyline itself.  In doing so, for me, they detract from the impact.

There are excellent films that do almost completely without non-diegetic music.  The Dardenne Brothers’ ‘Two Days One Night’ (about which I wrote in this blog several months ago) is a striking example.  The Coen Brothers’ ‘No Country For Old Men’, or Woody Allen’s ‘Annie Hall’ also.  Even Alfred Hitchcock chose not to use it in his films ‘Rope’ and ‘The Birds’.  It’s pretty clear that it is possible to evoke a strong response in viewers without this element in the mix.  Or if it is deemed appropriate by the director, why not keep it to a minimum?  Francois Ozon’s ‘Frantz’ I found to be a deeply moving film that used its soundtrack music sparingly and wasn’t afraid to do without it entirely in key scenes.  When I watch a film like this I feel I am able to make discoveries and draw conclusions for myself, without being told what to feel, often in unsubtle terms.

By all means include music in the soundtrack creatively.  It can be used, for example, to make an ironic commentary on what is being shown, or to add an element of emotion that is not included in what we are seeing/hearing within the story.  Yann Tiersen’s music in ‘Amelie’ for example adds a whole extra and often-humorous layer to what is shown and said onscreen.  Some films, like the wonderful ‘Koyaanisquatsi’, have been built around existing pieces of music.  Just don’t ladle it on, as so many mainstream films and so many of the well-known film-music composers seem to want to do.  Or maybe I’m just being some sort of art-snob, and should just accept that most people prefer it that way.  I don’t know.  I just feel that films in general would be better off and the experience of viewers would be enriched without it.

As for ‘Professor Marston…’, well, it wasn’t the worst example by any means.  The score was tasteful and on the whole quite pleasant, I’ll give it that.  It’s just that, for me, it added nothing whatsoever to the film, and I wished there was some kind of facility on the DVD player by which I could turn it off and enjoy the experience without being told so obviously what to feel. 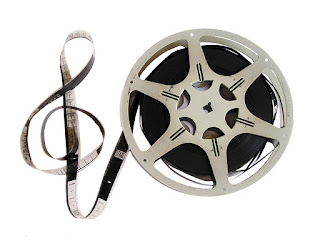 Posted by Wilful Misunderstandings at 6:44 AM No comments: 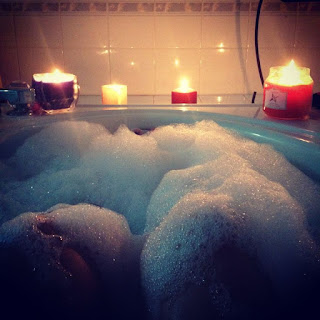 She peeled off the single strip of sticky tape, and pulled apart the tissue paper in which it had been wrapped.  “Very special candle,” she said to herself, imitating the middle eastern accent of the man in the market who’d sold it to her.  She sniffed at it.  The scent was still clear and strong, but definitely unfamiliar.  She placed it on the tiled ledge that surrounded her bath, a little away from the other candles that stood there.  She turned the taps and poured in the bath mix.

When it was full and the foam thick and inviting on the water’s surface, she took a lighter from a shelf and bent to light the candles, leaving the latest addition until last.  It was the least substantial of them all, yet there was something about its richly marbled, ochre red surface that had attracted her to it as it lay on the barrow where she’d bought it.  Something about that unfamiliar scent, too – a little spicy, a little like cedar-wood, a little of meadow flowers.  He needn’t have said a word, that seller.

She slipped off her dressing gown, hung it on the door and switched off the bathroom light.  As always, when she undertook this pleasant ritual, the tiny bathroom was transformed.  The perfect little flames, the warm steamy atmosphere, the mingling fragrances – all brought a sense of exotic cosiness to the bare functional room, with its plain white tiles, compact sink and mirrored cabinet.  That feeling was enhanced by the soft sensations of lowering her body through the foam and into the water, until all that could be seen of her – were there anyone to observe – was her face peering through the foam.

She was calm.  At ease.  Somewhere outside that door, the world and its hassles ground grimly on, but here she was detached and secure.  Nothing struggled to suck her attention, no desperate problems demanded that she conceived a solution.  Not now.  Not here.  This was refuge.

Thus, when she became aware of a series of sputtering sounds and raised her head slowly to see what was their source, she felt no sense of perturbation to discover that all the other candles had extinguished themselves, one or two of their wicks still smoking.  Yet the new candle still burnt with a generous flame.  It was sufficient.

It was curious that the others had gone out.  She would investigate later.  She lowered her head back into the water, immersed in the crackle of tiny bubbles bursting, and closed her eyes.

That scent.  Even amidst the foam, it was stronger now.  Her thoughts were  of palaces, of exquisitely tended gardens overflowing with blossom, elegant figures in silken robes walking slowly, observing the richness that surrounded them.  She imagined herself strolling amongst them, participating freely in their subtly worded conversations, occasionally drawing forth laughter with remarks that were both witty and apposite.

She could have been Scheherazade, re-telling the vast cache of nested tales that had saved her from death over the course of those one thousand and one nights, blessed with the learning she had acquired from vast but long lost libraries.  For there were none who could tell as she could of the fisherman and the djinn, of the three apples, the City of Brass or of Princess Parizade and the magic tree.

And in each of the magic trees that surrounded her hung golden, gleaming apples, perfectly ripened in the glow of a now descending sun – whose light rays pierced a scattered chaos of cloud forms, filling the firmament with radiance in a thousand exquisite shades of colour.  And in this sylvan idyll, she walked on, dressed now in elaborate robes that might have been painted by Rossetti, Millais or Burne-Jones, in that lush fantasy to which they subscribed of a past that never was.

That fictive past was hers in which to roam freely, its parameters just adjacent to those more commonly shared by the human throng.  If there was decay here, it merely served to feed and nurture rebirth.  If there was despair, it was simply a stage on some journey that led to revelation.  If there was terror, it was but a step from ecstasy.  So she strode, her body upright, her legs firm and sure, on a pathway that passed by pagodas, pantheons and pantiled archways, in a crowd of companions or in the simplicity of solitude.  Onwards.  Tirelessly onwards.

Until at last she knew she needed rest.  And where better to rest than in the still, sun-warmed waters of a tiny lake to which she came, grass edged and partially shaded by leafy beech trees and blossoming banks of rhodedendrum?  So she stripped herself of the silks and the braids which had adorned her body, and lowered herself into the lake.  Its temperature seemed at one with her own.  She swam a few languid strokes, then flipped to lie on her back, water supported.  And were there some traces of foam on its surface?  Was there not a faint sense of recognition about this water, and the lingering traces of a scent that was both familiar and strange?  She closed her eyes, floating, drifting, savouring all that she had perceived.

When at last she opened them again, she was in her little bathroom, and the only light was the burning nub of a once ochre-red candle.  A few more minutes and she would have been in darkness.

She rose, grabbing a towel, wrapping it around herself and stepped out of the bath.  She hesitated for a moment before pulling the cord to switch on the light. It would be intrusive, she knew, but it had to be done.  A prelude to everything that ‘had to be done’ when she stepped out of that little space within which the infinite had momentarily opened.  But she was not unprepared.  She felt clear and certain, ready for anything.

Too bad the candle had burnt down so completely.  She would look for that man next time in the market, she was sure.

But she was not so sure she would find him.

Posted by Wilful Misunderstandings at 4:03 AM No comments: