Failed to produce my blog on schedule last Monday, can't think why.

Failed to promote Wilful Misunderstandings in the run-up to the festive season, thus depriving myself of a potential sales cascade.  So all I can do is appeal to anyone with £6.95 (plus p&p) left to spend after the annual hoopla, with the following ad.  (And if you can afford it, buy it from Lepus not Amazon or similar please - cheap as they sell it, I get mere pennies, and I've yet to cover the costs of the printed copies I sell through Lepus...) 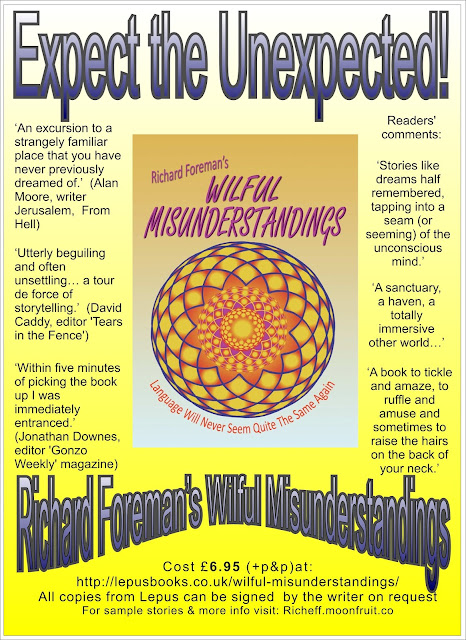 No other failures to report.

Wishing all readers of this blog a happy new year.

RF
Posted by Wilful Misunderstandings at 7:23 AM No comments:

We Are Crazy (and not in a good way)

An article in New Scientist magazine (25 Nov, issue 3153, p 12) brought home the impact of something I’ve a tendency to regard in a sort of intellectual way that, normally, does not have an impact on my personal sense of wellbeing.  It is that, as a species, human beings – all of us – are well and truly mad.

Under a headline ‘Using bombs to bomb-proof cars’, NS reporter Paul Marks tells us about the work of Roger Sloman, managing director of a company known as ‘Advanced Blast and Ballistic Systems’.  Sloman and his team are developing a system intended as a countermeasure to protect the occupants of military vehicles under which improvised explosive devices (IEDs) detonate.  Such a blast can, I read, ‘instantly catapult a vehicle many metres into the air’.  Because the floors of such vehicles are strengthened, there is less danger from the blast itself than from the intense upward acceleration, which can seriously or fatally damage internal organs.

Research revealed a ten-millisecond gap between the blast and the lifting of the vehicle.  The idea is that, in this interval, a detector could trigger roof rockets to provide a downward force to keep the vehicle on the ground.  The resulting devices are known as ‘linear rocket motors’ and one of Sloman’s colleagues says: “The peak thrust from all those rocket nozzles is insane.”  (Yes.  Insane.)  In a test one of the vehicles was reckoned to momentarily ‘weigh’ around 120 tonnes.

That life is sacred and that such a device may save lives if it goes into production, I cannot deny.  That such technology may have other uses in different contexts is also mentioned in the article.  What it does not mention is the cost of research, development and manufacture – which I can only assume must be vast.  Our resources on this planet are wearing thin, the fate of the human species is – as far as I can see – in the balance.  Why are we blowing thousands, perhaps millions, (plus brain power and materials that could be better used solving humanity’s mutual problems) on peak thrust rocket nozzles?

But this article had the effect of renewing and refreshing my sense of shock at what we humans routinely do to one another.  Palestine.  Syria.  Yemen.  Afghanistan.  Iraq.  The playing fields for war games.  News of conflict has a numbing effect by its very persistence.  It takes a bizarre story about a hi-tech design to anchor against explosive force (and the sense of black absurdity that surrounds it) to brush away the cobwebs of complacency once more.

(from ABBS website)
Posted by Wilful Misunderstandings at 6:03 AM No comments: