Hi to anyone who reads this,

These blogs started out as a way to promote my work - specifically at first 'Wilful Misunderstandings', my book of short stories.  As time went on it didn't seem appropriate to just plug the book so over the last three years I've tried to keep up regular entries of a varied nature: the occasional samples of my fictions and poems along with musings, dreams, profiles and reviews .  I hope I've provided some interest, entertainment or stimulation to anyone who has found them.

But there do not seem to be many of you discerning readers of this blog these days.  I'm not sure how much of this is to do with the impending/ongoing (?) decline/demise of Google Plus and how much of this is down to other causes, whatever they may be.  In the first year I tried to keep up a weekly schedule, but that proved to be more than I could manage, and I cut it down to two per month.  This I've managed to keep up more or less regularly over the last two years.  However, now, I've decided to cut down to one a month.  I'm not an intensely opinionated kind of person, and it takes me time to formulate and produce a piece of writing.  I have to consider the return on the energy and time invested.  It's not possible to say with absolute certainty, but it doesn't appear that this blog has actually resulted in a single sale of my book or helped me to 'raise my profile' - certainly not in a sustainable way.  The other kind of return, as with any endeavour is to do with how much enjoyment is involved in doing the work.  To that I can give a more positive response - I've had quite a lot of fun writing for this blog, and I still don't want to give up on it.  Hence the compromise, once a month.

For anyone who is interested here's what I am doing with my time in the writing field.  I've recently completed a first draft of my next major project after 'Wilful Misunderstandings' - a novel provisionally entitled 'Flash Company' - and am embarking on revision work.  I'd like to get it out in some form or another in 2020.  It tells of a poet for whom 'the muse' proves to be a powerful and terrifying force of nature.  More on that when it nears completion.

As mentioned previously in this blog I contribute to a couple of magazines.  I'm an associate editor of literary magazine 'Tears in the Fence', focusing on story contributions, but also contributing reviews and poems (there will be three in the next issue - #69, probably out this summer - and I think they're among the best I've written).  I am also an occasional contributor to the online magazine 'Gonzo Weekly' - which you can access by googling those words.  Last January I ran a listing in the blog of pieces contributed  by around that time, which I'll try to update at some point.  'Gonzo' deals mainly with rock music in a variety of styles (anything favoured by its contributors) but also looks at other aspects of the arts and of politics etc.  Well worth a look if your interests lie that way.

Because I think it does me good as a writer, I'm a member of a number of writing workshops, some specialising in poetry others in story writing.  Writing occasional pieces for presentation and sharing in these has built me up a back-log of short tales amongst other things - all in need of further work before being presentable - and could result in another short story collection being somewhere in the pipeline.  Perhaps one of poems too, though I tend to be extremely critical of my own poetic output and there are few with which I feel any great degree of satisfaction.

So there you have it.  That's what I'm up to.  Here's a pic of me reading at last September's 'Tears in the Fence' poetry festival, and the obligatory occasional ad for 'Wilful Misunderstandings' follows.  If you're reading this and you haven't read that, it's my duty to inform you that there is a serious hole in your life which can only be filled by sending off for a copy of that illustrious publication.  Do it now. 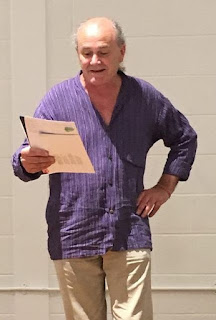 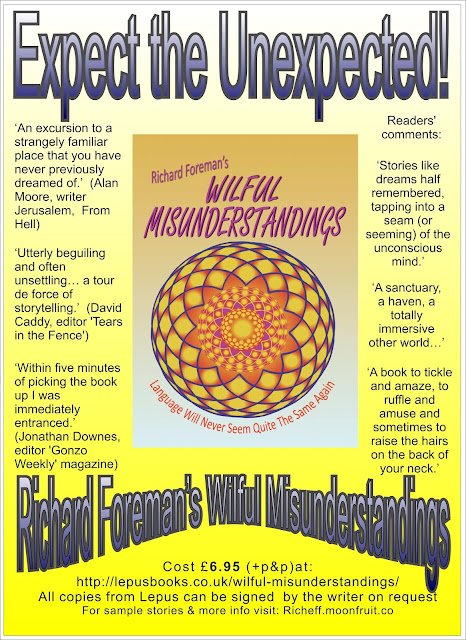 Posted by Wilful Misunderstandings at 6:28 AM No comments: