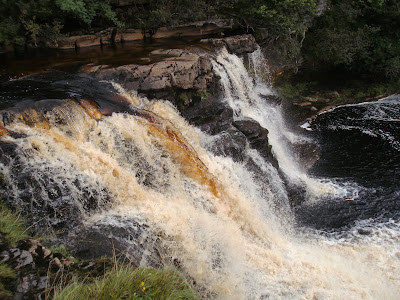 I can only identify this one from its context and date.  It was sometime in 2011 and almost certainly in South Wales where I lived at that time.  It doesn't matter.  Waterfalls are waterfalls wherever they are.  What brings me joy when I see this one is the skein of froth, the deep navy of the water above  - a colour that turns to a toffee coloured brown as it falls.  And the peculiar angle of the photo that makes the water at the bottom look like it's on a slope. 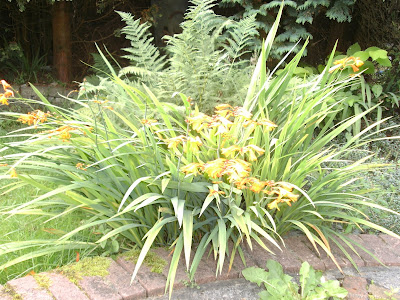 Here's a cluster of mombretias from my garden in that same year, with some ferns behind them.  It was a lovely little garden, private and surrounded by high hedges.  I can take no credit, that's the way it was when I found it.  I just kept it tidy and watched things appear throughout the growing season.  I love the spiky leaves, the way they cast out in so many directions, like a cartoon explosion, the flame of the flower heads glowing within. 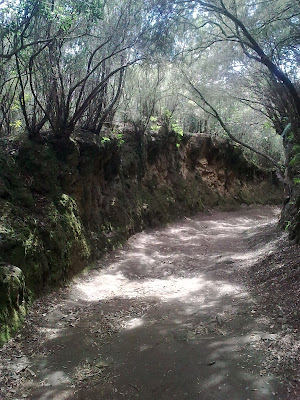 Here's an ancient pathway, a shot taken in the mountainous area of northern Tenerife in 2013.  I forget the name of the tribe that formed and used these paths, dwellers in this place long before the Spanish came - but given the state of much of Tenerife it was good to come across something so much more firmly grounded in the place.  In Dorset where I live now, there are numerous 'hollow ways' that are not dissimilar.  The mottled effect you are seeing on the level surface of the path is shadows from the surrounding trees, the white being direct sunshine pouring through the gaps. 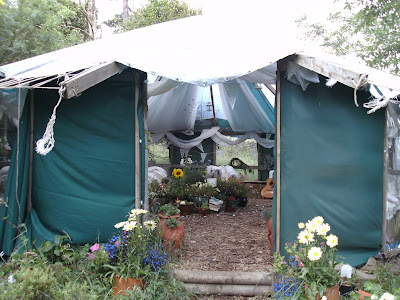 How could anyone resist the invitation this tent offers, with its carefully tended little central flowerbed where strategically placed candles wait to be lit, circles of straw bales around the perimeter wait to be sat on and a guitar awaits the hands of a musician?  Not I.  It's a place of worship and celebration in the grounds of Burnlaw, a Baha'i community  in Northumbria.  Every summer they hold a small festival which they call 'Earthing the Spirit'.  In the morning and the evening, anyone who wants to gathers in this tent for a period of time to reflect in silence, read from religious/poetic texts, and sing and play - all in complete spontaneity. Though I do not share their faith, I felt both welcome and fortunate to share in the spirit of this festival on two or three occasions in the early 2010s.  Sadly, it's unlikely that I will return, but I look at this picture and others I have of people enjoying the activities, the fun and sharing the wonderful food, and it lifts my heart. 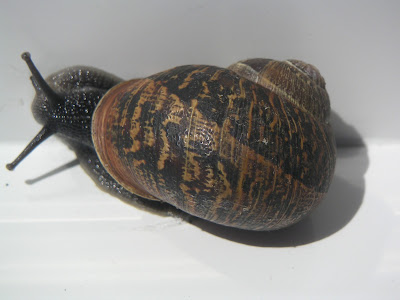 Pictured on my UPVC doorway back in 2013.  When you look at it this close up, even the squishy bits are jewel-like.

Posted by Wilful Misunderstandings at 12:38 PM No comments: