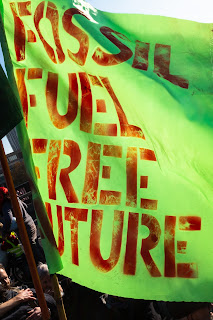 Having covered the Extinction Rebellion day on 17th November a couple of weeks back, I’ve had too much going on to participate in its subsequent actions.  These included several days of ‘swarming’, stopping traffic in London for short periods, and a second day of action commencing in parliament square a week later.  They’ve tended to get less overall media coverage than the earlier forays and I imagine this will be considered in the period of reflection the organisation intends to take before instigating further action in April next year.

Members of our local group have participated in some of these actions when they can, both in London and on a smaller scale in various localities.  Our group will be meeting again next week to consider the long haul ahead – enabling ourselves to participate more fully in forthcoming national non-violent direct action initiatives and considering what can be done to spread the message here where we are.

All well and good, but considering what we are up against, is it yet anything approaching enough?  The message is brutal.  Roger Hallam speaks of mass starvation across the world within 25 years.  We are in the process of societal collapse all across the planet.  While climate change continues to accelerate exponentially (an Arctic without ice by 2023 is one recent estimate), we face massive biodiversity depletion, ocean acidification, air soil and water pollution, water depletion, devastating consequences of soil erosion and deforestation.  The shit is hitting the fan everywhere we look.  Yet there is a feeling that most people don’t want to know.  We, myself included, continue to act as if everything is continuing as normal.  We watch ‘Strictly’, speculate about rifts between Kate/Will and Meghan/Harry, follow our teams/fashion icons/celebrities/rock bands and munch our takeaways as if nothing could possibly go wrong.  The alternative is just too scary to admit,

This of course suits a lot of people – most notably those who own and control most of the world’s wealth.  Look at what’s happening at the 2018 Climate Change conference in Katowice.  We already have the U.S., Saudi Arabia, Russia and Kuwait objecting to the conference ‘welcoming’ the recent Intergovernmental Panel on Climate Change report, even in the watered down form it inevitably took.  Insane as it seems, among the wealthy across the world there is a powerful desire to protect the status quo (and fossil fuel industry) right up to the end.  And it is not necessarily because they are genuine denialists or believers that technology will get us out of this.  Preparations are being made, bolt-holes and bunkers are being prepared for what, I’m told, they refer to as ‘the event’.  Meanwhile the media collude with the illusion, maintaining an increasingly dodgy concept of ‘balance’, afraid to upset anyone unduly and perhaps lose ratings as a result.

It is so easy to feel helpless, to sit around and say ‘we’re fucked, there’s nothing we can do about it’.  I’ve done a lot of that myself.  The value of Extinction Rebellion for me personally is not because I think it has a chance of succeeding.  It’s because I don’t want to die thinking I didn’t lift a finger, didn’t at least try to do something about what is so plain to see but so hard to accept.

Does it have a chance of succeeding?  This is what I’ve been wondering.  The feeling on Lambeth Bridge back on the 17th was powerful and good, but even there I found myself unsure about some aspects of what I was observing.  I can’t be one hundred percent certain but I suspect the majority of those who were on that bridge were well educated and middle class.  Certainly I saw very few non-white faces indeed.  Okay, there was a racial equality march in London on the same day, and that was important.  And there were four other bridges where the racial mix might have been less one-sided.  I hope so.  But my general feeling is that ‘Rising Up/Extinction Rebellion’ has been carefully thought out and prepared by a group of people who are academics in the main and that it is being embraced so far by people with the same leanings.  Its goal is mass civil action, powerful enough to make governments reconsider their apparent folly, but it has a long, long way to go before it can consider itself a mass movement.  To manage that, it has to break through social barriers, to sweep up people who have not yet grasped that anything out of the ordinary is going on.  That is one big ask.

And of course it’s not the only movement in the world that is seeking to sweep people up.  We have, as tends to be the case in times of deep insecurity, a resurgence of the right wing, of fascism and worse, as its leaders and rabble rousers offer simplistic pie-in-the-sky.  Over here we have the Brexiteers and the far right, Trump as figurehead for those who run the show in the US, and the likes of Bolsonaro in Brazil doing much the same.  And when it comes to ‘mass’ action, it seems the ‘yellow vest’ protestors in Paris are showing XR a thing or two (though perhaps not a purely right wing movement – don’t know enough to decide).  But I’m finding this paragraph too depressing to continue, so I hope you get the picture.  There is strong competition for hearts and minds here.

So the odds are stacked against XR.  But then I’m pretty sure that at one time or another in our history the odds seemed stacked against the abolition of slavery, women’s emancipation and more.  XR’s organisers make some play of quoting these events, and drawing in Martin Luther King and the civil disobedience that challenged racism in the US, along with Ghandi in India, as examples of how their strategy might work.  I want to believe them.  I really do.  They have my support, but building any confidence in their hope of success will be hard work indeed. 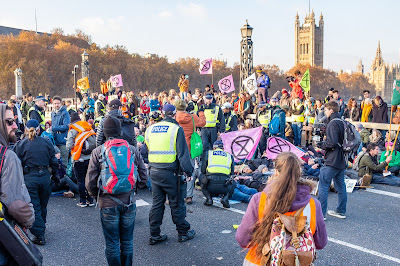 Photographs © Neil Baird | www.neilbaird.photography
Posted by Wilful Misunderstandings at 9:54 AM No comments: