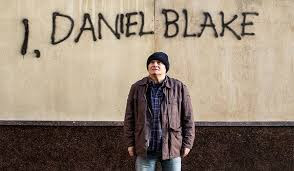 Ken Loach is a British film director, reputed for his presentation of stories concerning oppressed and impoverished men and women and their struggles to gain any measure of respect, fairness and decency from the agencies of State.  Yesterday, I went to see his latest film, ‘I, Daniel Blake’ and came away with both mixed and troubled feelings.

I cannot fault its message.  Recovering from a serious heart attack, its central character – a Newcastle joiner – is refused Employment and Support Allowance payments on the basis that he does not meet the utterly rigid criteria on which payment decisions are currently judged.  Although under doctor’s orders not to work, he is therefore forced to apply for Jobseeker’s Allowance and so finds himself in a ‘Catch-22’ situation in which he nevertheless has to go through the façade of job seeking for 35 hours a week - and then provide detailed proof that he has done so.  The film is the story of this and his attempt to appeal against the ESA decision.  Decent, honest but with little educational advantage, it becomes clear he is extremely ill-equipped to make any progress.  His fragile health begins to fail as he sinks into a situation of rapidly escalating destitution.

Through Blake’s story, and that of a number of other characters in similarly troubling situations, the film quite meticulously details the impact of an inhumane system on the health and emotional wellbeing of those who are – frequently through no fault of their own – caught in the ‘poverty trap’.  In the words of an old folk song: ‘There but for fortune go you or I.’

It’s a harrowing watch, as Loach’s films tend to be.  Though in the past he has effectively made use of humour (I have fond memories of Ricky Tomlinson in ‘Riff-Raff for example), it does not play a strong part in this story.  Of course, it’s no laughing matter.  It’s the best part of a couple of decades since I last applied for Jobseeker’s Allowance and I could tell which way the wind was blowing even in the ‘New Labour’ era.  Under recent Conservative governments in the UK, the misery and lack of fair treatment has escalated.  Now 80, Loach, I’ve read, came out of retirement to make this film and I can only applaud his commitment.
But in terms of my personal response to ‘I, Daniel Blake’ I have to strike a more critical note.  To me, the very meticulousness with which it details the dire situations facing these characters is to its detriment.  It provokes empathy certainly – most of us, even the wealthy, have some experience of dealing with difficult bureaucracy – but for me the characters were not sufficiently well portrayed to evoke strong feelings of sympathy.  Almost every scene seemed designed to highlight some aspect of their plight.  I could almost imagine the tick-boxes being filled in.  “Impact on children of displaced families.  Right, we’ve got that one in…”

All important boxes to tick.  Of course.  But the film comes over too strongly as a piece of propaganda, the characters as cyphers – adequately but not effectively drawn.  It’s a dramatised documentary in many ways (as some of Loach’s work has been in the past).  As a story, there’s really not much to it.

Does this matter?  I think it does.  For a start it’s too easy for those with a vested interest in this hideous system (no names but the initials IDS do spring to mind) to dismiss it as such.  “There’s old Loach banging on again.”  But maybe too there’s a disrespect in this work, a failure to acknowledge the complexities and contradictions in human experience.  This leads to some distortion.  In the Job Centre scenes, we see every worker (with one exception) presented as a rather unpleasant ‘jobsworth’ – seemingly unable to deviate from the script that accompanies the rules they have to enforce.  In my experience, and that of people I know who’ve done the job, it’s a bloody tough row to hoe working in a Job Centre.  And for some, it’s the only job they could get.  I’d say a much higher proportion than are shown in the film, do try at least to be sympathetic and to assist their clients as best they can.  I’m sure this was not Ken Loach’s intention, but in his film they come across far too much as people you want to boo and jeer at.

All this tended to alienate me.  There were scenes that should have brought me to tears and they didn’t.  As such, it’s my guess that ‘I, Daniel Blake’ will tend to preach mainly to the converted.  There’s not enough about it to grab the attention of and perhaps open the mind of anyone who hasn’t already experienced or at least considered these appalling conditions that successive governments (and commercial interests) in the UK and much of the rest of the world have perpetrated .  If a piece of art is going to do this kind of political job, I think it has to use more subtlety, it has to find a way to get further under your skin.  It has to put a lot more emphasis on depth of character, even if that’s at the expense of a few tick boxes.  In the case of a film like this one, it has to work better as a story.

I’ll mention in passing Alan Bleasdale who, in his best work at least, has succeeded in this endeavour.  I was going to go on to discuss another film from two or three years back that really had a powerful impact on me.  Same sort of territory in many ways, but one hell of strong story.  But alas my blogging time has run out for this week, so consider this part one of a two parter…

Posted by Wilful Misunderstandings at 7:13 AM No comments:

The Allure of Dub

I can’t remember exactly when I first heard dub music.  Goes back for sure to a time when it was what they did with reggae records only, at a guess during a year spent living in London, 1976/7.  For the first 6 months I was living in Shoreditch as a volunteer helper in a hostel for people who had been released back into the community from psychiatric hospitals, for the remainder in Tufnell Park with a guy who was living in and rebuilding the interior of his house.  Dub music crept up on me from various sources.  Heard on the streets, source unidentified.  On local radio shows – the name David Rodigan springs to mind.  In the hostel – a young Jamaican guy, quite disturbed, haunted by duppies, possessed this one early album by melodica man Augustus Pablo.  Record shop windows – Prince Buster ‘The Message Dub-Wise’, said by some to be the first album of dub mixes.  Lee Perry interviewed on the radio (perhaps by Rodigan) giving it large with his incomprehensible, vaguely biblical patter.  These are fragments I remember, how it seeped into me.

I’d been a bit snooty about reggae up until a year or two before, associating it with skinheads and cultures beyond my ken, then won over by Marley and the Wailers somewhat.  Oh, and Desmond Dekker, ‘The Israelites’.  But this dub stuff, it was huge, stately, booming.  One minute it’s just the steady throb of drums and the bass, then bursts of magnificent, heavenly horns, laden with reverb, exploded by flashing fingers on the equalising slide-bar.  Ghostly voices way down in the mix, suddenly hitting the foreground, trailing off in echoes and distortion.  To me it was about as psychedelic as psychedelic gets.  When the mood for it takes me, still feel that way, forty years later.

First dub album I bought  was called ‘Rasta Have Ambition’, a compilation album featuring mostly d.j. cuts on side 1.  But on side 2 – what I was after – five dubs by King Tubby, one of the great dub production artists and another claimant for the originator title.  It started with a track called ‘Invasion’, which had all the qualities of those many unidentified dub tracks I’d heard on my rounds in the Smoke.  Got to admit, the album trailed off a bit after that.  Some dub stays on the spot for too long, forgets to startle, lacks resonance.  But ‘Invasion’ was the business.  I’ve heard other mixes of it since, under different titles, claimed by different artists.  With what appears to be a blurring of the roles of producer, mixer or engineer, and a plethora of ‘versions’ to boot, it’s hard to know what’s what.  Best to just find what you like and enjoy it. 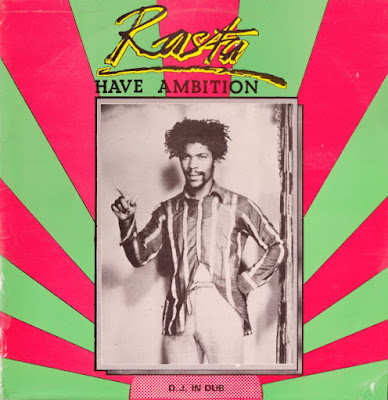 Bit further down the line came Lee ‘Scratch’ Perry and the Upsetters’ ‘Super Ape’, which was the business from beginning to end, made me a devotee of Perry’s Jamaican ‘Black Ark’ productions, and remains a favourite to this day.  Mixes like thick soup, the sound rolling through layers of distortion, constant unexpected insertions…  But also tunes, riffs, melodies that lodge in your memory.

Within a few years, dub techniques were in common use well beyond reggae.  Plenty to be found on the web about the history of all that, I’m sure.  Just wanted to relive and share that first thrill.

Posted by Wilful Misunderstandings at 8:48 AM No comments: