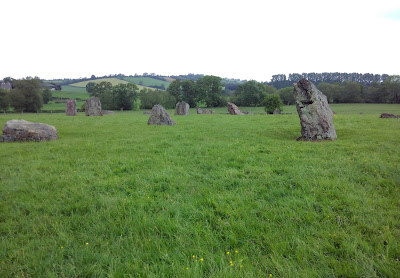 An inevitably wet UK bank holiday curtailed an expedition to take a look at the Maes Knoll hill and then the stone circles at Stanton Drew in Somerset earlier this week.  My fellow traveller and I only got to look at two out of the three circles, and missed the ‘Cove’ and the ‘Quoit’ entirely.  But hey, we’d already got soaked going up to the Knoll and we had to make a dash for the church porch to shelter from a further torrential downpour.  We hadn’t anticipated the need for total waterproofing.  Smartphone predictions let us down.  Another such expedition is called for, as and when.

So this is no neo-antiquarian well-informed write-up of serious research, nosirree.  This is a bit more personal.  I’m trying to figure out what it is that attracts me to these sites, these relics, these objects…  Am I doing it because that’s what people do?  People of certain types that is, whether Glasto-revering hippies old and young or strictly academic archaeological authorities or those who straddle the divide or just plain sightseers…  I can identify to some extent with any of them.  Am I romancing?  Am I looking for clues in the ever-elusive quest to figure out why us human beings do the things we do?  Is it some kind of compulsion to which I’ve succumbed over the years?

I guess it started for me with Stonehenge.  I still have, somewhere amongst my random archives, a 60s guide book or leaflet.  School trip or family outing, I don’t remember but - as in those days you could - I walked among those megaliths and felt something that stayed with me.  Awe?  Excitement? A sense of the mystery of pre-history – those stories that we can only speculate upon, based on fragmentary clues with multiple possible interpretations?  Some kind of link, in the presence of these objects, with ancestors who placed them in such locations?  A sense of the sheer sweat and blood involved, and the conceptual sophistication of their construction?  Not only that but the realisation that these things were built to last.  Planned obsolescence, the curse of modern times, was not part of their makers’ thinking (an observation I must accredit to my partner, by the way).

So there were values in operation here.  Were they values that I might share?  Who knows?  There are only these elusive clues.  Do they have anything in common with that which has been built within times of historical record in the way of locations for divine contemplation – cathedrals, monasteries, temples and the like?  It seems hard to deny this possibility.  Yet archaeologists joke amongst themselves that ‘ritual significance’ is a catch-all term for ‘we’re not quite sure’.

In my youth, enthralled by psychedelia, I was prepared to buy into the then current speculations about leys (or ‘ley-lines’ as I now gather we mistakenly called them) as energy channels, the earth’s meridians.  I can remember a visit to Avebury, some time in the 70s, and touching the stones there, ready to believe that something vaguely mystical would seep into my consciousness and bring me to enlightenment.  Didn’t work, I’m sorry to say.  Enlightenment requires a bit more effort than stone stroking.

With age, I read more, spoke with enthusiasts for whom a somewhat nuanced view became the norm.  And still I sought the stones.  The Rollrights, the burial chambers and megaliths and smaller circles that abound in Carmarthenshire and Pembrokeshire, and – not so long ago – my first visit to Long Meg and her Daughters up near Penrith.  The folkloric tales that abound around these sites are always fun – people turned to stone for various misdemeanours or whatever, the devil hurling boulders from nearby hills.  They wind their way into my imagination and I daydream of these stones coming to life and animation when no one save the dreamer is looking.  I’m not sure Mike Parker Pearson would approve, but even he must have his more whimsical moments.

Up at the Long Meg site I tried to channel whatever it was that brought me there.  I wrote a poem that touched on some of the questions I’ve listed here.  It raised the concept that even the most solid of rock, when looked at in the longest of terms where tectonic plates cause continents to shift and reshape, is mutable.  As it will be too in about six billion years, when the sun becomes a ‘subgiant’, doubling in size.  In another couple of billion, it is estimated, our planet will melt into it.  In this light, there’s a poetic resonance I find to those tales of transformation.

No answers then, just fascination.  And the stones themselves – the sheer beauty in their shapes and surfaces.  At Stanton Drew, according to the useful write up on the stone-circles.org.uk website, the stones are a mix of limestone, sandstone and breccia – a sort of conglomerate.  They are intricately weathered, often pock-marked by erosion, and then – like any rock surface – coloured and patterned by lichens, mosses and other small growing things that lodge in cracks or on ledges.  My eye-to-brain channels are in love with the endless abstractions thus created.  Nature has been doing Jackson Pollock just about since the world began. 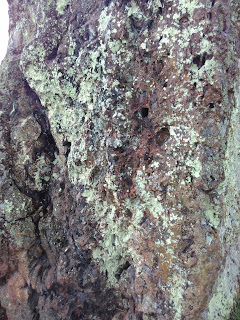 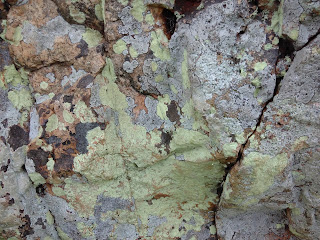 And a final thought.  If ever there was room for wilful misunderstandings, surely these are the places.  Archaeology constantly refines its comprehension with new equipment, new ideas and interpretations – but mostly, I think, acknowledges that there will never be enough information to give a definitive interpretation.  There will always be room for wedding guests or knight-errants turned to stone and for Satan lobbing his lumps of rock.

So maybe I’ve answered my question.  But as readers of this blog may have gathered by now, my place is permanently set amongst the bewildered, so I can never quite be sure…

If you want to know more about the middle path approach of neo-antiquarianism, check out www.northernearth.co.uk/ and maybe take out a sub.  With regard to Stonehenge and the apparently
inadequate proposal to tunnel the A303 below it you might want to take a look at www.stonehengealliance.
org.uk where there's a petition you can sign if it's a concern of yours.

Posted by Wilful Misunderstandings at 5:13 AM No comments:

I should think most of you have heard it by now, the little joke about what President Trump’s bodyguards would have to shout if he came under fire.  Yes, of course you have.  “Donald!  Duck!”  It’s actually one of those ones where, if you give it some thought, you realise they probably wouldn’t shout that at all.  It would be more like: “Lower yourself, Mr President!”  Or perhaps, given the reportedly regal nature of his audiences with the media of late, “Get down, your highness.”

But of course, Donald doesn’t duck.  He would not so much as consider lowering himself.  He’s so high he can’t get down.  And if he remains standing, bold and pugnacious, and there’s an accurate shot, perhaps his last words will be: “You’re fired!”

So there we are, at this point the joke backfires completely.

As probably - if some of the complaints I’ve heard from some comedians are to be accepted - do most jokes about the current incumbent.  “You can’t make it up,” they say.  “Reality outstrips you every time.”  Which feels about right – many of the darkest, funniest routines about Trump seem merely to involve straight description of the activities and pronouncements of the president and his cohorts.  A bit of canned laughter can be added to the soundtrack to keep us chuckling - if, at any point, we forget to think it’s funny.

I love a bit of satirical comedy as much as the next vaguely leftie old hippie, but here’s the thing.  Sometimes when I appreciate the commentary it’s making, I find myself thinking: ‘These men and women are so wise, thoughtful and observant.  They make their observations with insight, their deductions hold logic.  Why can’t they run the country instead of…?’ (conclude with an expletive of your own choice concerning politicians).  And it seems to me just about credible that they could do a better job.  And of course the media coverage would be lively and fun.  It would boost public interest no end.  In the UK we could have Jeremy Hardy and Alexi Sayle as the Corbyn and McDonnell of the labour party; Stephen Fry heading the lib dems and Roy ‘Chubby’ Brown helming what’s left of UKIP into oblivion.  Though for some reason I find myself struggling to think who might do for the conservatives.  Jim Davidson?

In fact it probably wouldn’t work out.  I’ve been a great admirer of Eddie Izzard for many years (even if I don’t always get his space age approach to cross dressing) and have observed with some interest his efforts to get involved with political activism on behalf of the labour party and the ‘remain’ campaign during the run up to last year’s referendum.  But he doesn’t appear to have distinguished himself on this front or to have added a great deal of worth to the debate as yet.  Maybe the crossover requires a character with a bit more grit.  Mark Thomas springs to mind.  Or perhaps (and it has occurred to me that I’ve so far failed to include any female comedians) Josie Long.

I guess my conclusion is that it’s obviously one thing to diss the politicians, quite another to replace them.  It isn’t that difficult to take the piss or point out the flaws, especially if you ignore the fact that not all politicians are 100% venally motivated.  Pockets of integrity do crop up amongst them and sometimes even endure – providing they don’t get assassinated, as one of ours did last June.  The simple logic of my initial thought dissolves into the complexity of the world as we know it.

It helps to have a laugh, as one despairing friend of mine remarked after I’d re-posted a video clip of Mark Steele doing one of his affably scathing rants about Teresa May’s election u-turn on my Facebook page.  That inane joke around Trump’s first name with which I began this piece certainly made me laugh the first time I heard it.  And there’s not much that causes me to laugh about DT, or the power structure that now finds it advantageous to have him presiding.

Laughter does put it into a different perspective, presents another facet of reality in which foibles are made transparent.  I’m not talking about caricature so much here, which often slips too easily into insult alone.  It’s the observational comedy that works best for me, the stuff that points out the inconsistencies, contradictions, self-interest and deceits that lie behind the pompous facades.  Comedians can do that pretty well, even if they’d be no better at running human affairs than anyone else.

But then, I think there’s room for a bit of silliness as well. 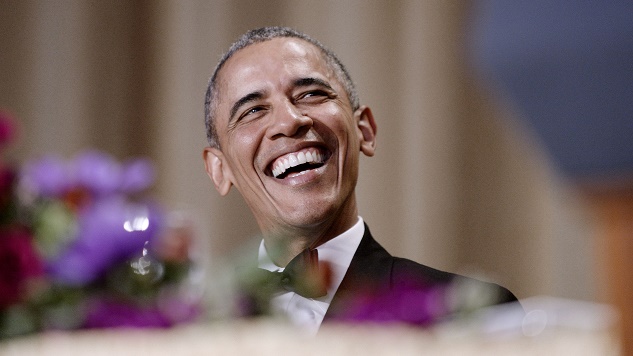 Posted by Wilful Misunderstandings at 10:09 AM No comments:

Averse to verse? Then look elsewhere!

You ask what does my thumb oppose?
A set of fingers, I suppose.
It’s likely that I’d let things slip,
if I failed to get a grip.

If this digit was a critic,
would it tend to be arthritic?
If I took a strong position,
would it rise in opposition?

And should I need to offer thanks,
would it wag a stern phalanx?
Take me to task by hitching lifts,
instead of buying thank-you gifts?

Though there’s no reason why it ought
to be equipped with conscious thought,
it’s still my opposable thumb –
and I suspect it just plays dumb. 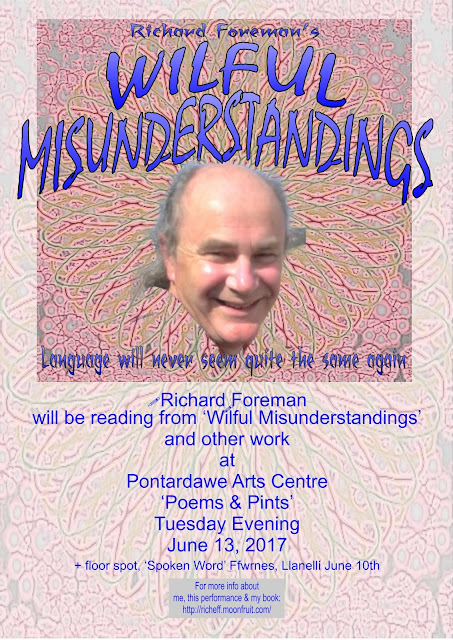 Posted by Wilful Misunderstandings at 3:18 AM No comments: