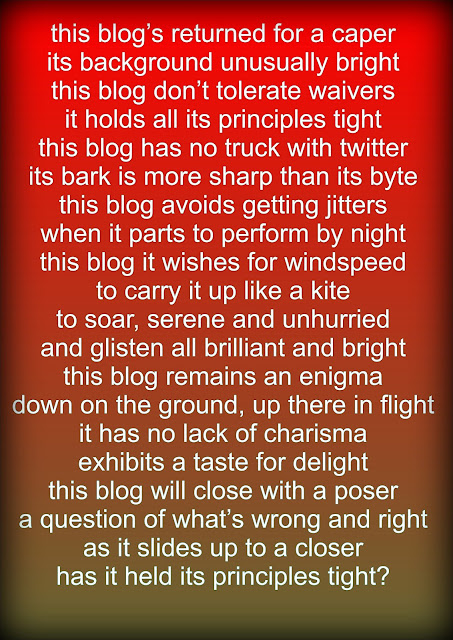 Posted by Wilful Misunderstandings at 8:51 AM No comments:

I’ve spent a large part of my life living with vegetarians.  I’ve never been one myself.  Thought about it at one stage of my life and decided I’d probably have to go the whole way if I was going to do it, veganism, no more leather shoes or belts, and being kind of lazy decided against it.  I do subscribe to the idea that human beings eat far too much meat and it is a grossly inefficient way to use the waning resources of our planet.  But that kind of dovetails with my own relative lack of interest in or strong desire for meat and my contentment with the idea of eating it occasionally and selectively.

But anyway, living with vegetarians tended to divert my cooking skills – such as they are – away from meat recipes and I built up a fair knowledge regarding how to use wholefoods etc.  Getting protein from pulse/cereal combinations or dairy products seemed to work for me.  But as the years went past, there were times when I got a bit tired of using the same products over and over.  Maybe I wasn’t being imaginative enough or looking in recipe books with sufficient enthusiasm, but I began look out for anything with which I could vary my diet – without going to too much extra effort.

I think I first heard about quorn when it was being marketed as a new product in the mid to late 1980’s.  At first I was snooty about it.  Why manufacture something to be like meat in the first place?  Also it seemed kind of pricey and I’ve lived most of my life on a tight budget.  So the best part of 25 years passed without me trying it, as far as I can remember.  It wasn’t ‘til I found myself in a new relationship with a woman who’d taken to using the stuff, utilising it in some rather pleasant recipes, that I realised what I’d been missing.

I’m not sure it would convince any confirmed beefsteak fanatics.  But if you cook it right, you can add a lot of flavour to it and –particularly in its ‘chunk’ form - it has for me an agreeable texture.  Great in curries, wraps, casseroles and more.  And some of the quorn products turned out to be tasty too, burgers and escalopes and such.  So far so good.

However, times and partners have changed, and my received wisdom on this is under question once more.  Quorn is a microfungus, derived from soil mould and grown in vats.  It is subsequently heated and vitamins and nutrients are added to it.  It is a ‘processed’ product.  We are told that certain processed foods are bad for us – reconstituted meat products being a prime example.  Could it be, it was suggested to me, that quorn might be in the same bracket?

It was an upsetting question.  I’d got used to using the stuff, enjoying it in many of its marketed forms, and it seemed cheaper these days.  Would I have to go back to my old pre-quorn ways?

Well, on the home front, I’m still working to defend it.  I’ve been thinking about the word ‘processed’ and what it really means.  ‘Food processing is the transformation of cooked ingredients, by physical or chemical means into food, or of food into other forms,’ says Wikipedia.  So it includes cooking, mincing, slicing and dicing, and pickling for example.  As far as I know no such processes has an intrinsic tendency to make food ‘bad for us’, far from it in a lot of cases.  It is pretty much inseparable from the concept of cooking.  Or so I tell myself.

Not only that but I’ve yet to locate any information regarding health issues associated with quorn consumption.  Okay, I haven’t looked that hard, so if – oh you precious and rare readers of this blog – you have come across any such information, do please let me know.  I will view it with an initially sceptical eye, of course, but I’m always open to good evidence.

I have to go now.  My stomach’s rumbling and quorn burgers await me.

Incidentally I’ve received no financial or other incentives from Marlow Foods for this blog.  Chance’d be a fine thing… 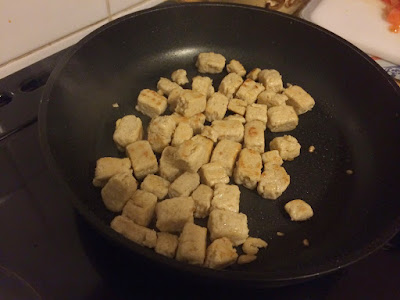 Posted by Wilful Misunderstandings at 10:04 AM No comments: