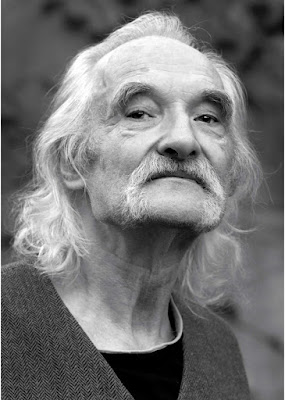 Found dead, earlier this month, in the Innerspace Studios apartment where he’d lived for many years, Holger Czukay was a unique musician.  I didn’t always ‘get’ his work.  Experiments, by their nature, are not always going to be successful.  Chances taken are not always going to pay off.  But my respect is reserved for those who take such risks, especially when they’ve the skill and vision to achieve at least the occasional sublime result.

The 1979 album ‘Movies’ is, for me, the most wholly successful of his works.  It was re-released in 2016 under the title ‘Movie’, remixed presumably to its creator’s satisfaction and with an additional instrumental version of its opening track.  I’m still living with the original recording, listened to once more on the day I read of his death, and still as fresh and vital a set as when I first heard it.  Intricately laced into its exhilarating rhythms, filigree guitar patterns and occasional, archly quirky vocals are a seemingly endless sequence of what we eventually learned to call ‘samples’.  Music from the middle east and elsewhere recorded with the scratchy sonic patina of imperfect reception on a.m. radio, plus snatches of American film dialogue and animated cartoon sound effects are the principal elements of this dazzling weave.  This audio collage is all the more amazing on account of its painstaking construction, involving the splicing of magnetic tape by hand, from what I can gather. 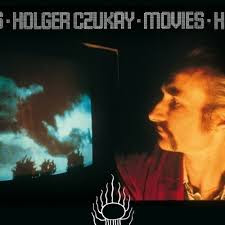 Whilst it was not an album by Czukay’s former band, Can, his bandmates all contributed, drummer Jaki Liebezeit most consistently.  Also recently deceased, Liebezeit continued to work frequently with Czukay during the 80s and 90s.  Interviews indicate a deep mutual respect.  On ‘Movies’ Liebezeit plays in a more nuanced and subtle manner than in the heyday of Can, but his utterly precise yet deeply felt rhythms are an essential part of the drive that carries the listener through its two lengthiest pieces: ‘Oh Lord Give Us More Money’ and ‘Hollywood Symphony’.  It’s been a few days since the evening I played it, but it’s a testament to its quality that the music has soundwormed its way into my thoughts and sequences of it still replay frequently somewhere within my brain.

There are equal, if not quite such consistent delights to be found on the majority of Czukay’s other recorded works.  The delightful ‘Ode to Perfume’ on follow-up album ‘On the Way to the Peak of Normal’, another lengthy and intricate piece; the haunted ambience of ‘Träum' mal wieder!’ and ‘Music in the Air’ on each of the albums that followed…  These spring to mind as personal favourites.  What anyone will pick out for his or herself will depend on taste, of course.  What might be chosen can be picked from an astonishing diversity of sounds and moods, from merry melodies to jarring discords.  One thing Czukay never was was predictable!

He got himself involved in some marvellous collaborations too.  Lengthy ambient works constructed with David Sylvian over two albums and occasional work with Jah Wobble stand out for me.  In later years, Czukay also worked closely with partner U-She – although at this point in his career the beauty came for me in smaller and rarer snatches.  That doesn’t matter – he’d earned the right to explore wherever and whatever he wanted.  The last of his albums to really draw me in was his ‘internet audio collaboration’ which was released as ‘Linear City’.  Its slow developing, techno immersed patterns took a while to penetrate but proved eventually to hold a full wealth of musical sensations.

Since I first got into music there have been certain artists whose individuality as creators has stood out and shone for me in ways that somehow go beyond just being great musicians.  I’m thinking of Don Van Vliet and his Magic Bands; of Lee Perry in his Black Ark Studio period; of Michael Hurley and his extraordinary songs…  It’s stuff that touches me beyond taste, beyond intellect.  On a direct line to whatever I think of as my ‘soul’, I guess.  Czukay was one of them, without a doubt.  Our world is more impoverished without him, but his achievements shine on.

Posted by Wilful Misunderstandings at 9:08 AM No comments:

This year, apart from ‘Air B’n’B’s (all as yet pretty good), I’ve stayed with my partner in two accommodation establishments.  Looking through my notebook, I discover I’ve written descriptions of the main rooms we’ve stayed in, in both.  There could hardly be more of a contrast.  Here, slightly edited, is what I wrote:

The living room: our cwtch.  A section of white-painted stone wall protrudes into the room, to the left of a wood burning stove and small well-packed bookcase .  Draped from its top surface ledge, held in place by an unused spinning wheel, a ‘witch’ doll and three hand made teapots, is a roughly sewn patchwork quilt.  The exposed surface is made of flowery and patterned cottons – from old dresses, perhaps – in simple squares.  From one of the beams on the lean-to sloped ceiling, a wicker basket hangs.  Below this a small round pine table, with three matching chairs, and a rocking chair.  Against the opposite wall an old sofa, scattered with random cushions, and an electric heater in the corner.  Red velvet curtains hang on either side of a small window, which looks out on a garden view, ageing wooden bench seat prominent on the grass.  On the sill, a collection of beautiful objects – boxes, hand-painted stones, a vase of fresh picked wild flowers.  On a small chest of drawers, there’s a TV for those who want it, discretely covered with a drape of diamond patterned Indian-design material.  Next to it, another vase filled at this time with the season’s daffodils.  On the walls are various pictures, original paintings by the proprietor amongst them, and a mirrored candleholder.  And hanging, nearby, a deep and richly sonorous set of wind chimes.  A lushly patterned rug sits on the carpeted floor.  Overlooked by a ‘sleeping platform’, reached by means of a steep wooden staircase that descends into the room, this is a profoundly restful place.  It is suffused with a sense of calm and grace.  At the foot of the Presellis and a few minutes walk from the Gors Fawr stone circle, it’s amongst the most beautiful holiday accommodation I’ve ever experienced.

One of 187 near identical rooms, it is quintessentially utilitarian.  With the exception of a reasonably comfortable double bed and a garish yellow pouffe in one corner, everything you can see is in the shape of squares or rectangles – at least down to the level of smaller objects such as kettle, lamp shades etc.  It’s set up for self catering, and on a wall that separates the bathroom from the living area, is a fairly well equipped array, including microwave, fridge, hob and even a dishwasher.  The surfaces are in a white-grey veneer, patterned with a vaguely woodgrain effect.  There are no carpets.  It’s as if a double bed has been inserted into a kitchen.  Each side of the overall building, which is shaped as a semi-circle, comprises of a series of huge identical windows, separated by thin strips of concrete.  Each of these windows forms an entire room wall and cannot be opened (temperature control here being governed by a noisy air-conditioning device).  Like every other window to be seen, it’s covered by a large net curtain.  The view on our side of the building is of a flat, concrete semi-circle, beyond the straight edge of which is the breeze block architecture of York’s ‘Barbican’ theatre venue.  There is not a single piece of greenery to be seen.  Back inside, there’s a small square Formica topped table, with two dining chairs.  Along with a couple of bedside cabinets, that’s it for furniture/décor, apart from three standardised pictures hung above the bed, and a large, wall mounted, black flat screen TV opposite.  After a while here, I start to remember 60s/70s S.F. novels of dystopian, overcrowded futures, where human accommodation has been reduced to ‘cube cells’ or whatever.  This room feels like an embodiment of such a vision.  The only anomaly being that, down at the reception desk, there are still human beings, not robots.

To be fair, which I suppose I must be, the cumbersomely named ‘StayCity ApartHotel’ chain exists with the intention of providing relatively cheap, ‘no-frills’ accommodation in city centre locations, and is doubtless appreciated by those who make use of it.  While, in deepest Pembrokeshire, Anna Kavanagh’s Trallwyn Holiday Cottages (go to http://www.simplystonecottages.com/ for more info) are a sheer labour of love.  But having written both these pieces, I could not resist presenting the juxtaposition. 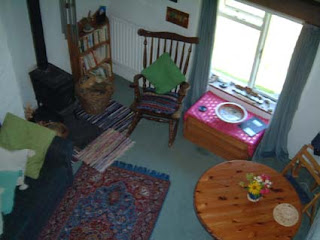 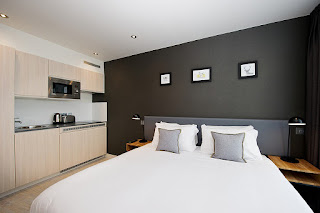 Posted by Wilful Misunderstandings at 4:21 AM No comments: