My partner alerted me to the Rising Up organisation a month or two back, as plans for the events which commenced with a road-blocking by Parliament Square on 31st October were already under way.  They were offering talks on climate change and the need for immediate action to combat the near inertia of our government (and others) on this urgent issue.  Also the failure of the media to present both climate change and biodiversity loss as the threat to humanity’s continuing existence in the increasingly near future that it clearly is.  The chosen method by which they hoped to highlight this issue was non-violent direct action in acts of civil disobedience, and they also offered training sessions on how to do this.  First thoughts were, this looks interesting but do they have the nouse to pull off something that the Green Party et al have yet to achieve?  We decided to ‘watch this space’ and pick up on it if it looked like it was going to go somewhere.

It certainly does have that appearance now.  Only a couple of weeks ago some enterprising locals got a couple of speakers to come to our town and give a talk on what was by then going out as the ‘Extinction Rebellion’.  Over a hundred people showed up, which for a rural north Dorset town is impressive.  The speakers were a former anti-road-campaigner and a young woman from an alternative community who had only been drawn into the movement herself a couple of weeks before.  They spoke with passion and good humour.  Regarding the recent IPCC report and the muted response it received, they pointed out that since the breakdown of our climatic systems is occurring with exponential rapidity its findings were already way out of date, not to mention the degree to which they were compromised by political input.

What impressed me was the careful thought that had clearly gone into this initiative.  The speakers emphasised the requirement to approach non-violent direct action ‘respectfully’ and of a ‘regenerative culture’ within their movement.  This included a recognition that some of us are prepared to face arrest etc. and some aren’t, but that all support is valued at whatever level.  And also that the organisation has a commitment to giving legal and other support its activists.  There’s a lot more to it than I’m including here – the info is out there on the web.  If you care about the situation, google Extinction Rebellion and take a look. 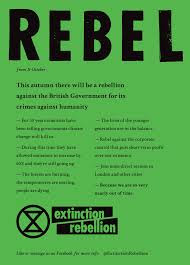 Following the talk, things moved fast.  A local ‘affinity group’ was set up and one of the speakers returned the following week to give us some basic NVDA training.  A number of us were available to go to London for the ‘rebellion day’ on the 17th.   A minibus was hired, and on a chilly Saturday morning at 7am, set off with thirteen of us on board to join the rebellion.  Up until a day or two before we though we would be heading for Parliament Square but then the news came through that Lambeth, Westminster, Waterloo, Blackfriars and Soutwark bridges were to be blocked.  We were asked to go to Lambeth, and headed on foot from our transport to the bridge, passing Roger Hallam – one of the organisers – being interviewed by the media on the way there.

The first part of the action was both tense and kind of bizarre.  We felt like extras in ‘The Third Man’ as we gathered on and around the bridge, in pairs and separate clusters, trying not to look as if we were preparing for what it was clear that almost everyone present knew we were going to do.  This included several police officers, waiting on the pavements.  There was a helicopter overhead and police vans constantly crossing the bridge, with sirens blaring more often than not.  We knew roughly what to do when the signal came, but not exactly when that would be.  At one point a youngish, lightly bearded gent approached us and informed us it would all be happening between 11 and 11.15am, and where best to position ourselves.  It turned out that he was Rupert Read, another of the organisers.

When the time came, it all happened pretty quickly.  I assume that some of the more seasoned ER activists took the necessary action at each end of the bridge, and those of us who were on it became aware that suddenly the road was clear of traffic.  We swarmed over the barriers onto the roadway, and sat ourselves down.  I was not aware of the police taking any action to try to stop us.  We knew they had been informed of what was to take place.  I’d guess that with five bridges to monitor, and the fact that there was also a big racial equality march taking place in London that day, they were simply too stretched to do anything preventive.

For a while after that it was like a good many demos I’ve participated in in my younger days.  There was a sound system set up and after the organisers who were assigned to this bridge – including Mr Read – had said a few words, people were invited to take the microphone and say their piece, as were musicians and readers of poetry.  Preaching to the converted, of course, but all enhancing the sense of common purpose and being given plentiful support whatever the quality of their output.  I was particularly impressed by a woman from Cumbria who spoke articulately and at some length about the effect of climate change and biodiversity loss that she has been observing and experiencing in recent years.  She was filmed – hopefully that clip will show up in due course.  When there weren’t folk speaking, singing or leading chants, there was a fairly funky playlist of music on the go, and a generally festive atmosphere.  Lots of banners and flags with the hourglass ER logo – a couple of banners that caught my eye were the ‘There is no Planet B’ one and the brutally EJ Thribb-ian ‘Roses are red, violets are blue… unless they’re all dead’.  I spent most of the event holding up one end of a colourful painted one by an artist in our group, thus necessitating photographing and eating/drinking to be a largely one-handed affair.

The group grew considerably in number over the next hour or so, several hundred though I couldn’t be sure how many.  Police were a constant but unobtrusive presence throughout this period, mostly at the periphery of the group, occasionally walking through the crowd and/or conversing with individuals therein.  But then came a warning that they were planning to start making arrests.  Having decided that this time round I didn’t feel ready to go through the arrest experience, I moved to the pavement to be an onlooker, as did some others.  But those who chose to risk arrest were plentiful, bless ‘em, and the bridge remained fully occupied by seated people and some who chose to lie down.  In due course small groups of police came amongst them and seemingly at random made arrests, carrying people off where necessary.  At each one a cheer rose from the crowd, in support of the arrestees.

It was rather obvious that there were not enough police to have a hope of clearing the bridge.  I assume that this was also the case on the other four bridges.  At various points we were told that they had run short of vans also.  My, hasn’t austerity bitten hard?  But in keeping with the ‘respectful’ ethos, a lot of sympathy was expressed, and the vibe was pretty much ‘we know you people have just got to do your job here, and it’s a shitty one at that.’  As mentioned earlier there was an odd feeling too.  The police, with vans and signs were doing the actual blocking of the road at either end, protecting us from irate motorists.  There was a token feeling about the arrests – a sense that a show of law enforcement had to be made.

They did eventually return in somewhat larger numbers, and several of them formed a line across the bridge to the south of the assembled group.  The purpose of this was never entirely clear, other than to stop people exiting or entering that way.  At the north end roadblock, people were allowed to leave but not to re-enter.  The police came in amongst the crowd on the roadway small groups to make a second wave of arrests.  I think I heard an estimate that there were around forty, out of the eighty to ninety people in total across the span of the action, arrested on Lambeth Bridge.  It was rumoured that we were mainly targeted being the shortest bridge and potentially the easiest to clear, but I don’t know how authoritative that one was.  Two of our group were amongst them – processed and released later on the same day, with the possibility but no certainty of some prosecution pending.

But then, quite suddenly and unexpectedly, the police left.  The roadblocks remained but with fewer vehicles.  Just a few community police officers stayed hanging around at the edge of the crowd.  Perhaps there was trouble elsewhere, affecting the racial equality march.  Though I’m happy that the event got a certain amount of press coverage (those amongst us with smartphones were monitoring it by the end of the day), it is one of my regrets that the other marchers seemed to have got no coverage at all.

And that’s about it.  I’m not sure how long people remained on the bridge after we left at around 3.30 to 4pm.  There didn’t seem much point in prolonging it – the statement had been made.  We had a deadline for getting back to our minibus so were unable to join the subsequent action in Parliament Square (where, I later read, trees were planted).  It was clear that we had played our part in a well-planned and effective piece of political action.  The campaign is ongoing and escalating, as it must be if it has any hope to have an impact that will reach our cloth-eared legislators.  I expect to be participating in more such actions, though have too many commitments to take part in those that will take place over the next week or two in this the first major phase of the ‘rebellion’.  I applaud everyone involved.  My hopes for the future of humanity, larger wild-life and the future of the planet are not strong, but I cannot not have some part in this initiative, despite the odds against it.

Here are Extinction Rebellion’s three demands:
1. The Government must tell the truth about the climate and wider ecological emergency, reverse inconsistent policies and work alongside the media to communicate with citizens.
2. The Government must enact legally binding policy measures to reduce carbon emissions to net zero by 2025 and to reduce consumption levels.
3. A national Citizen’s Assembly to oversee the changes, as part of creating a democracy fit for purpose.

It’s drastic stuff, but – as they say – we are facing an unprecedented global emergency.  Let’s not quibble over what is and isn’t possible by 2025, let’s just go for it. 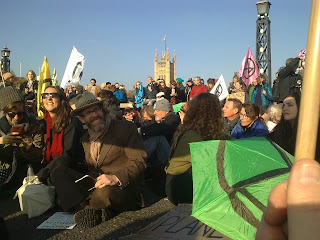 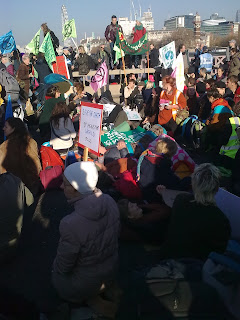 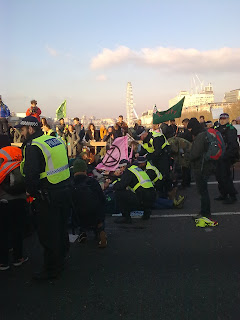 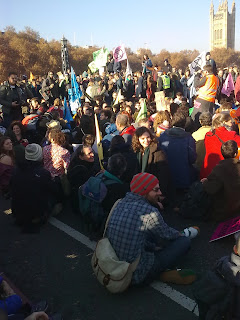 Posted by Wilful Misunderstandings at 10:16 AM No comments:

unfolding stories cross this stretch of time
selective recognition
from banner headline mongers
regarding violent death
attention channelled to order
at a word from the elite
deals concealed, re-framed in gilt
young men with neat haircuts and sharp suits
tell yarns with an air of authority
old men clog the future
grab the crotch of hope and squeeze
preaching ‘growth’
distributing the clutter of suffering
while science speaks of end-times
fair warning swept aside
by tides of tattle
celebrity shared vicariously
as the cute-brigade spin
turning like clockwork
to dazzle the eye, plug the ear
and scent away the stink 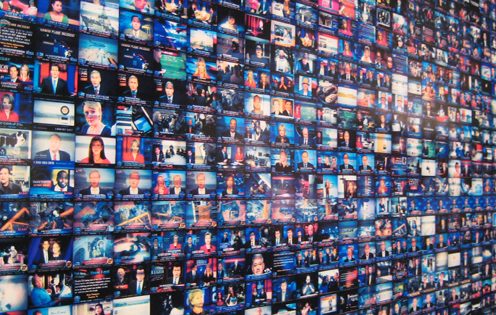