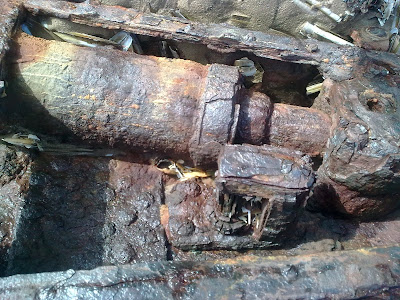 I love to find old machinery that is in some advanced state of corrosion, having been abandoned or otherwise found itself deposited in the landscape.  This was on a beach in north Norfolk.  Use whatever digital doo-dahs you have at your disposal to magnify this picture.  Look at the surfaces, the way they are flaking away in slow disintegration, and the colours: the blues, the ochres, the mauves...  Humans pollute the surface of the earth in ways beyond number, but now and again, nature gets to work and makes our ugly deposits beautiful again.  Doesn't mean we shouldn't try to rein in our monumental carelessness of course, but beauty is where you find it. 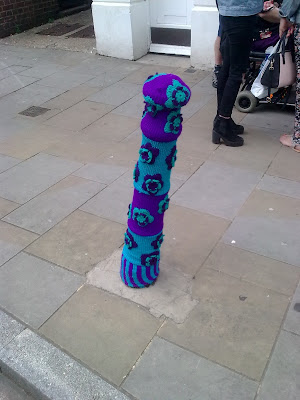 In 2017, street bollards in Romsey, Hampshire, began to suffer a strange affliction.  They became intensely sensitive to low temperatures and began to lose all semblance of sturdiness as a result, cowering and shivering where they once stood proud on their paving stones.  A civic emergency was declared and the town's knitters, crocheters and felters were co-opted en masse to deal with the crisis.  Vast numbers of 'bollard-coseys' were created in a stunningly short period of time to protect these sensitive metal objects from weather extremes of any kind.  Here you see one example. 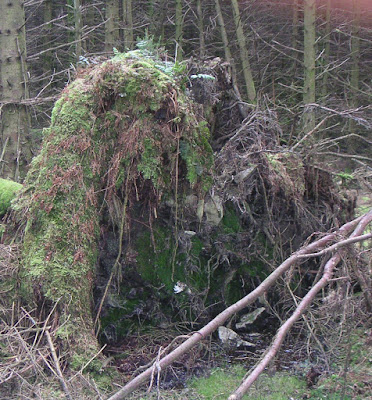 Long time readers of this blog (come on, there must be at least one or two of you) will know that, some decades ago, I wrote the scripts for three issues of DC's 'Swamp Thing' comic.  This is the closest I've come to encountering said character in what we laughingly know as 'Reality'.  Its resemblance to the moss shrouded roots of a fallen tree in Pembrokeshire woodland is purely coincidental. 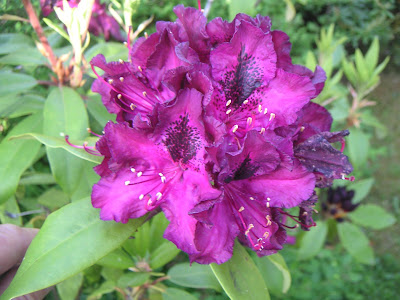 I mentioned the garden of my house in South Wales, where I lived until a few years ago, in the last blog. These came up for a short period every summer and were a glorious explosion when they did.  I never managed to find out what they were (azaleas of some variety?) but this is about the clearest photo I ever managed to take, showing just one of the flower clusters. 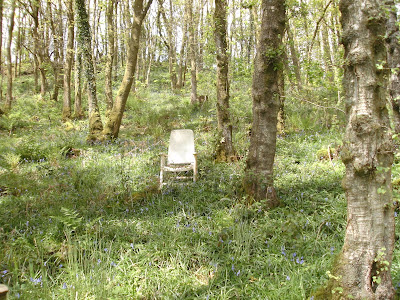 We end where we began, in a way, with a human made object left to decay in a landscape, this time a wood near Brechfa, South Wales.  Being plastic, it's probably still there, though this pic was taken in 2012.  So it's just another bit of pollution, really, but I can't help imagining that the local tutelary spirits might enjoy a little sit there, as dusk turns to night, or at dawn, awaiting the sparkle of fresh dew in the early daylight.

Posted by Wilful Misunderstandings at 7:39 AM No comments: