Working for the DC Dollar - Part 1: How I Got There

Working for the DC Dollar
Part 1: How I Got There

First off, I’d like to thank any of you who are regularly reading this blog for giving attention to my words and occasional images.  There have been no more than 600 ‘hits’ so far, so I’m not exactly in the major league and of course I’ve no idea how many of those are just glances and how many represent a reading of one or more entries.  But it feels like a substantial number to me, and – as I say – those of you who actually do read these words are appreciated.  (Even those of you who haven’t got round to buying a copy of ‘Wilful Misunderstandings’ yet.  Tch tch.)

If you’ve got here via my website or through Goodreads, you may be wondering about my former incarnation as Dick Foreman, writer of ‘Black Orchid’ and a scattering of additional work for DC and other comics publishers back in the 1990s.  I generally describe myself, to anyone who asks, as a small footnote in the history of comics – but even footnotes can be of interest to some.  So I thought I’d share a few reminiscences from those times over the next few weeks, and wrap it up with some sort of how I got from there to here summary.  Here goes…

(I’m working purely from memory.  If I started going through diaries and records from that time, I’d take far too long to get this out.  Maybe one day, if it seemed worth the effort…)

A little bit of scene setting to start with.  The late 80s and early 90s were, I think, a rather exciting time to be reading and making comics in the UK and the US.  There was a sense that the market for them could be opened as wide as that for books and films.  Comic strip art wasn’t just for children and adolescents.  The term ‘graphic novel’ was being bandied about for the first time, and boy did that sport a bunch more gravitas than ‘comic’.  Or so it seemed.

You can find the history of all this elsewhere.  Threads that led us into this situation at the time included the radical influence of ‘underground’ comics during the late 60s and 70s; the stunning savvy of the UK’s ‘2000AD’ comic; the impact of the Alan Moore’s innovative writing as it began to emerge and that of those who followed, spearheaded by Neil Gaiman and Frank Miller.  New possibilities seemed to be opening on every front.

I’d been working as community artist for a good few years, and much as I enjoyed that work, felt a growing desire to concentrate on my own projects.  I’d been a lover of comics since my childhood and encouraged and greatly assisted by friends already in the business decided to try my hand at scriptwriting.  In due course, as is the way of these things, my work appeared in various small, independent publications.  A 2000AD ‘Future Shock’ (one off short story) followed, but I made no further headway with them. 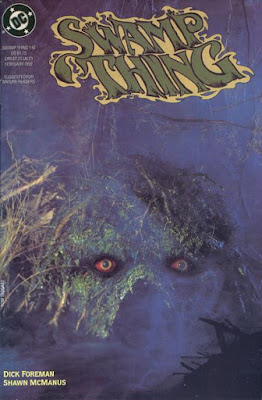 It was about this time that US publishers DC Comics were preparing to launch their Vertigo series of comics, in the hopes of cashing in on the perceived ‘adult’ comics boom.  Editor at the helm was Karen Berger, who had worked with Alan Moore on his US breakthrough series ‘Swamp Thing’ and subsequently signed up a number of UK writers who appeared to be following in his footsteps, among them Gaiman, Grant Morrison, Jamie Delano and Peter Milligan.  (For the sake of brevity, I’m leaving artists largely out of this account, essential as they were and brilliant as many turned out to be.)  As regards my nascent ‘career’, Vertigo seemed a likely target at which to aim.

The route to regular work with DC was via ‘fill-in’ issues, one off stories for ongoing titles to be used when a regular writer needed a break or had fallen behind with deadlines.  With a little bit of help from my friends, I managed to blag three of these, starting with a Swamp Thing story (‘The Growing Season’) of which I am still proud.  Whatever the merits of this and the other two, they proved sufficient to put me in line for more work.  Coming up to the same level around this time were another wave of UK writers, including Garth Ennis, Mark Millar and, possibly a little later, Warren Ellis.

Are you noticing a gender bias in all this?  Some things weren’t changing so fast.  But to Karen Berger’s credit, on the US writer roster for upcoming Vertigo titles were Nancy Collins, Ann Nocenti and Rachel Pollack. 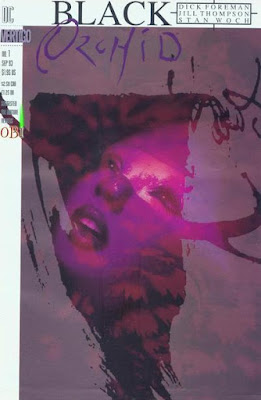 My opportunity came with Black Orchid.  I wouldn’t have chosen it myself.  I’d read Gaiman and Dave McKean’s three issue ‘deluxe miniseries’ as I think I recollect it was termed.  It was a well enough done revamp of an obscure old DC character, with lush, sophisticated artwork, but it did not hold my interest or excite me in the way that the best of Gaiman’s work on his breakthrough comic series, Sandman, had.  In retrospect, when I was told that an ongoing series was planned for the character and invited to submit a proposal, I should probably have let this reaction guide me and said: “No, thanks.”

But hey, whaddya gonna do?  You jockey along in the hope of getting regular work.  When the offer comes – you turn it down?  I don’t think so.

A more confident writer than I was at that time might have.  But I had the feeling I’d got where I was by the skin of my teeth.  Any faith that the DC editorial team placed in me was shaky at best (and perhaps rightly so).  My track record was thin, and I recall at least a single one-to-one meeting with Karen Berger, which felt awkward and difficult – I suspect for both of us.  With no sense of certainty that I would be offered anything else, no ‘gift of the gab’ and no readily marketable alternatives to offer, this seemed like the one opportunity I had to prove my worth.

Next: After a difficult genesis, the new Black Orchid series takes off and, for a short while, flies.

Posted by Wilful Misunderstandings at 6:47 AM