I’ve got the Brexit Blues,
I’m sick of all the fuss –
All they ever say is:
Hey, what’s in it for us?

Are we safe in our homes?
Will we be more secure?
They dangle statistics
Like fish bait to allure.

Are we being ripped off
By the fat bureaucrats?
But on each side they wear
The same grey suits and hats.

Can we make more money
And keep the migrants out?
It’s marketing bullshit
Is what they’re all about.

Out come the insults:
Election time again!
All got vested interests -
Those women and those men.

I’ve got the Brexit Blues.
My question’s simply hurled:
You live in one nation?
Or live in one sweet world?

That’s all there is to it.
Those self interested crews –
Those jerks they just give me
The mean ol’ Brexit Blues.

Yeah, those jerks just give me
The mean ol' Brexit Blues.


It was my plan to just run this, this week.  However, a few thoughts need to be added.

First is, if you’re reading this from outside the UK it is conceivable that you might not have a clue what I’m talking about.  So some explanation is required.  UK media are currently swamped with debate, propaganda and arguments about the election on 23rd June as to whether or not Britain should remain in the European Union (hopefully I don’t have to explain what that is – life’s too short – Google it!).  The inelegant term ‘Brexit’ has been coined by our media as a shorthand for this.

My contention, as outlined in the poem, is that nationalistic self-interest vastly outweighs principle on both sides of the argument.  As far as I’m concerned the principle is simple.  Do you believe we should still have nations and that they should be separate (then vote go)?  Are you an internationalist and of the opinion that we live in one world and the sooner we stop having nations at all the sooner we might become capable of finding world peace, tackling global warming etc. (then vote stay)?  Whatever the disadvantages really are, vote according to the principle – not ‘what’s best for us’ – and then WORK towards changing things for the better.

You can probably guess from stanza 7 of the poem or from the paragraph above which way I'm intending to vote.  However for me there is a complicating factor.  TTIP.  The Transatlantic Trade and Investment Partnership agreement.

If you don’t know about TTIP, PLEASE Google it!  It is as far as I can see, a totally pernicious development.  Amongst its many, sleazy, utterly anti-democratic measures, it will enable big corporations to sue national governments if they make any legislation that limits so-called free trade – no matter how environmentally sound, ethical and in accordance with the will of the electorate that legislation may be.

Bad news.  And last night, in a conversation with a friend whose views and political awareness I respect, it was put to me that its imposition upon us will be inevitable if we remain in the EU.  I questioned this, was it not possible – particularly if we remain under Conservative rule – that they would be eager to sign up to it whichever way the vote goes?  Her opinion was that we would be in a better position to resist it within a single nation, than to try to tackle the ‘European Superstate’.  She might have a point there.

I will stick to my principle, but it will be galling to think that a vote to remain could equate with a result favouring TTIP.  I just hope that, in or out, a way can be found to stop it.  Check it out and if you agree, sign a petition, donate to a campaign, join a march, tell your friends etc. etc.

Damnit!  None of this is going to help me sell my bloody book.  Here’s an advert to make up for it… 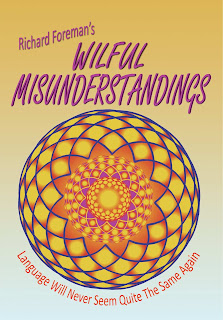 Comments are coming in from readers of Wilful Misunderstandings, and so far they've been well positive.  Here's a sample:

Just to say I'm so enjoying your book. I've just finished 'Moon Bar Night'. It's mind expanding. How did you come up with that? Amazing. Loved the language, characters, everything about it. Your stories are like dreams half remembered, tapping into a seam (or seeming) of the unconscious mind.  (TJ Alderson - novelist)

I'm really enjoying reading Wilful Misunderstandings!  I love the feeling throughout the stories of shifting, malleable realities, it is so much fun and encourages thinking in new ways about the world. Love it! (Emily Hinshelwood - poet, climate change activist)

And speaking of Alan Moore, if you've missed it so far, here's what he had to say about Wilful Misunderstandings:

With an unusual oulipo toolkit and a feigned bewilderment at the English language, Richard Foreman strikes a previously undiscovered seam of literary inspiration in this oddly charming compilation of deliberately misconstrued everyday phraseology. Words are the essential wallpaper of our lives and our reality, and when even the word ‘wallpaper’ can suddenly become a thing of eerie, alien beauty we are made uncomfortably aware of the peculiar worlds of possibility that lurk beneath the skin of our vocabulary. A passport to a parallel planet where nothing means quite what you thought it did, this book offers an excursion to a strangely familiar place that you have never previously dreamed of. Get your shots and book your ticket today.

So there we are.  Click on this link to Lepus Books (or go to Amazon etc. if you need to economise) and buy it.  You won't have any regrets.


Posted by Wilful Misunderstandings at 5:56 AM