Working for the DC Dollar - Part 2: A Dodgy Take-Off

Working for the DC Dollar
Part 2: A Dodgy Take-Off

Last time I wrote about being offered Black Orchid by DC Comics and, despite some misgivings, deciding it was my best (perhaps only) chance to break into comics writing on a regular basis.

It was my intention to be a professional scriptwriter.  Okay, I told myself, to meet that description I ought to be able to take on this challenge.  I re-read the miniseries and also at least some of the original Black Orchid stories from the 70s or whenever they’d appeared.  Essentially, I felt, Neil Gaiman had followed a template established by Alan Moore with Swamp Thing – to take a somewhat vaguely conceived minor comic character and re-package them with a more convincing, better thought out conceptual framework.  Since he’d only intended it as a one off mini series, Gaiman brought less rigour to the process of working this out and – significantly for me – sewed in a lot less in the way of potential threads to develop in a continuing series. 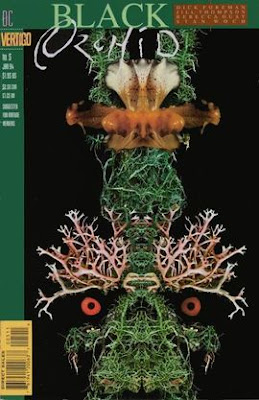 Black Orchid was both a product of pseudo-science – a human/orchid hybrid – and a mystical being, an ‘elemental’, like Swamp Thing and, by then, other members of that comic’s cast.  My opening proposal to DC was centred chiefly on the latter aspect of her nature.  The Orchid was a force of nature, barely glimpsed in bodily form by human beings and largely incomprehensible.  Like the tale of the blind men and the elephant, those who encountered the Orchid would conceive of her only in the form of the part of the whole that they had personally encountered.  But those encounters would change their lives in some significant way.  For the first twelve issues at least, these people would be the focus of self-contained stories, in the style of so-called urban myths.  The linking device for all this would be the reporter character I introduced, who has some information regarding the origin story and is trying to track down what has become of the being who once manifested as the super-heroine, Black Orchid.  Eventually, by issue 12, he would have his own devastating first encounter with her – which would constitute her first real-time appearance in the comic.  How I’d follow that, I probably had little idea, but it is the way of a continuous comic series that you build in threads that will lead to new possibilities as you go along.

Looking back, I still think that was a pretty damn cool approach to a character who, let’s face it, was never going to be that easy to write.  I could have had a lot of fun with those human characters and their self-contained stories – some humorous, some thrilling, some just starkly awesome.  Sadly, it was not to be. 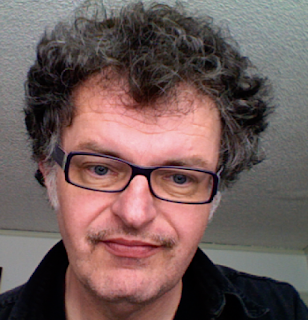 The editor to whom I was assigned for the series was Tom Peyer.  Tom is sharp, politically suss and a really nice guy.  I liked him a lot and felt comfortable with him at all times.  I’m not sure to this day what he really felt about that original proposal.  What I remember of what he told me was that he liked it, could see the potential, but…

And the ‘but’ was that Vertigo, for all its pizzazz about creating comics with adult themes for adult readers, was not quite confident enough to boldly go into this new territory wholesale.  There was still a need, either felt by Tom (who was still a bit of a super hero buff himself) or by those above him, for some sort of super-heroic element - and that had to be manifest in Black Orchid.  You could make it mad, post-modernist and surrealistic, as Grant Morrison and Peter Milligan had already done by then, but you still had to have people in costumes visible on the pages.  12 issues of a comic in which the title character appeared only fleetingly as a character or purely as a force of nature in other people’s stories was a no-no.  Could I not condense that idea I’d had into a single first issue, and then develop a story arc in which the Orchid figured as a character that readers saw and could relate to?

Once again, my own lack of confidence undermined me.  These editorial people knew their business.  Maybe they were right.  Especially one of them that I liked and respected.  Again, with hindsight, I feel I should have told him that if I couldn’t do what I felt was right, I’d rather walk away from the project.  Vertigo itself pretty quickly realised that if it was to succeed on its own terms, it would have to sever far more of its connections with the super-hero mainstream.  And it did.  One quite early Vertigo title, Matt Wagner’s Sandman Mystery Theatre was not a million miles from my concept, as far as I can remember.  And increasingly, as it struggled to maintain sales, the imprint experimented more and more with a variety of different story formats.

But me, I did my best to comply with the stipulations that had been laid down.  Bad guys were needed and would have to be fought.  Gun play would occur.  Cliff-hanger endings were required.  You get the picture.  The comic about a human/orchid hybrid became a hybrid between two styles of comic, and as such it was not entirely successful at being either.

Next: Well, I said last time I'd get on to the Orchid's first few flights, but this chunk of the story was a bit longer than I thought and the next chunk will work better as a complete and separate entry.  So next time: how she flew, how she fared, and some words about the artists with whom I was fortunate to work.  Stay tuned!


Posted by Wilful Misunderstandings at 7:12 AM