Working for the DC Dollar - Part 4: On the Crusade

Working for the DC Dollar
Part 4: On the Crusade

The Orchid is under way, but whoops! Duck!  Here comes the next glitch...

I forget exactly when it came along, but the next spanner in the works was in the form of what DC called a ‘crossover’ series.  This had worked for them pretty well, I gather, in the super hero comics.  Comics fans, you’ll know what I’m talking about so you can skip the rest of this paragraph.  For the rest, here’s how it worked.  It was, essentially, a marketing exercise to sell more comics by running a major must-read storyline across a range of titles, including some of the less popular ones.  So a Batman loyalist would start reading this as a Batman story, but then realise that he’d have to buy a copy of …  I don’t know…  Aquaman or something in order to find out what happens next.  The classic one was ‘Crisis on Infinite Earths’, and, well, I guess that doesn’t leave an awful lot out.  Except infinite non-Earths, I suppose.  And come to think of it, there’s probably quite a few of them.  Hey ho.  Anyway, the fan would buy the copies he needed of the titles he didn’t normally buy, and then – maybe – stick with them, as collector mentality kicked in.  Something like that, anyway.

So someone, perhaps in the accountancy department, decided that this principle should be applied to what DC at some point started calling the ‘Vertigo Universe’.  What were they thinking?  Wisely, as far as I know, they only tried it the once.

Perhaps because he had developed a close working relationship (and I think some degree of friendship) with Karen Berger at the time, they roped Neil Gaiman in to set up a framing concept and write a couple of one off comics to top and tail this impending saga.  I’m sure that he, like most of us, has a bunch of ideas in his notebooks that he knows are not his best – but that might come in useful for something or other one day.  Enter: ‘The Children’s Crusade’.

I won’t attempt a synopsis.  Much of it is forgotten.  Suffice to say that Gaiman wrote (or maybe just plotted) his two comics and the rest of us had to recount the various plot threads, following the breadcrumb trail from the first to the last, in each of our various titles.  Well, once again, with the benefit of hindsight… 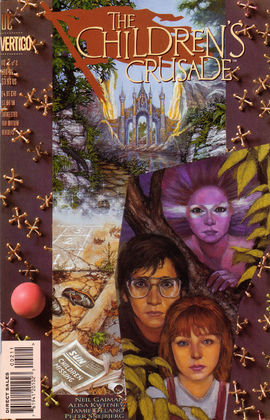 But you see, there was this jolly.  Dangling, a lure…  Oh lord, the sirens called me and I should have resisted…  Expenses paid trip to New York city.  A visit to the DC offices, where Superman forever bursts out through a wall in the foyer.  (Well he used to, anyway.  Maybe he’s had to shoot off and rescue Lois Lane from a burning building by now.)  A few days in a swanky conference centre at a place in upstate New York called Tarrytown.  I think I still have a stationery pad from there, lurking in a drawer somewhere.  Perhaps most interestingly, a chance to meet some of the then fellowship of Vertigo writers – Ms Collins, Ms Pollack, John Ney Reiber.  And, as it turned out, less interestingly to discuss with them, some editors, my good friend Jamie Delano and Mr Gaiman himself the ins and outs of this now barely remembered storyline.  A creative summit, if you will.

One thing that amused me while we were up in Tarrytown.  Back in super hero land, DC were running a 'death of Superman' storyline.  They've probably killed him off and resuscitated him a few times since then, but at that time it was actually making the news in the US of A.  So once the people who were serving us with food and stuff found out we were part of the DC outfit, they were on to us like a ton of kryptonite.  Was Superman really for the chop?  They seemed genuinely concerned at the possible imminent destruction of this icon.  Of course, none of us had any more of a real clue than they did.  But we were able to point out that it was a tad unlikely that DC's cash cow would be sacrificed for good.  Phew.

Then, back in NY city, there was a comic convention to attend, situated in some huge, soulless industrial unit.  Those two astute Scotsmen who will forever be associated with the heyday of 2000AD comic were there and full of the joys of flying over Manhattan in a helicopter.  I remember a trip to see some pretty weird metal sculptures in a little gallery in some trendy place that I’ve forgotten the name of (SoHo?).  I remember getting but one afternoon’s free time.  I walked the streets in search of hip record shops; maybe finding somewhere I could get my hands on whatever was still being published in the way of underground comics; and buying myself a black beret in the mistaken belief that it would make me look as cool as Alan Vega out of Suicide.  Or was it Martin Rev who wore the beret?  I remember being almost completely unable to sleep in 40th floor hotel room.  Good times.  I think.

But as regards the development of Black Orchid as a comic, it all proved somewhat counter-productive.  In the mini-series, preceding my work, Gaiman had created a second Orchid, who took the form of a child and for some reason I now forget was called Suzy.  An Orchidette, you might say.  In the spirit of at least selective honesty with which I write this account, I must now admit that I’d had no idea what to do with Suzy.  So I’d left her in a sort of limbo until I figured out what to do with her.  Maybe she would come in useful for something or other one day.

The clue’s in the title.  For ‘The Children’s Crusade’ I had to do something with the Suzy character, fish her out and give her a role.  This, it seemed to me in my by-then bewildered state, necessitated building new layers to the Orchid mythology – in order to connect with the various mythological realms that were being utilised by other writers in the crossover project.  I think at that point I got bogged down, and produced a kind of myth structure which – at its worst – was a second rate imitation of Neil Gaiman’s ‘The Dreaming’. 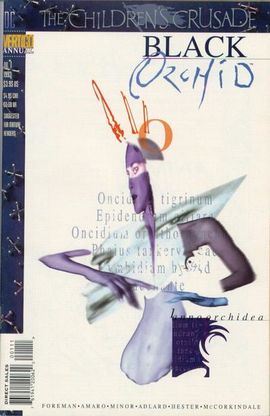 Having set up this future cross to bear, and having worked my way to the end of that first too hastily conceived ‘story arc’ (as the in-house terminology had it), I now had to contemplate where next for the Orchid.  And where next for Suzy, now that my hand had been forced and she was back on the scene.

Even as I began to tackle all this, I was notified of a change of editor.  I forget what pastures Tom Peyer first went onto, before he eventually withdrew from being an editor and went back to writing.  I didn’t read his super hero comics, but I do remember reading ‘Cruel and Unusual’ – a darkly satirical look at the death penalty in the USA, written in collaboration with the estimable Mr Delano.  Sharp and biting, if I remember rightly.

Meanwhile, with some trepidation, I contemplated the creation of a working relationship with my next editor.  A gentleman by the name of Louis ‘Lou’ Stathis.  If  Tom was cheese, Lou was to prove a particularly tough form of chalk.

Yes, when next we meet bite into the chalk that was Lou Stathis, the former 'Heavy Metal ' editor who saw 'Black Orchid' through to its final issue.

Posted by Wilful Misunderstandings at 8:24 AM